From 1pm on August 4th, 1914, Britain was at war with Germany and Gidea Hall was commandeered by soldiers of the Artists Rifles, as were the mews cottages, at the end of Heath Drive (serving the large houses in Main Road). An early form of graffiti—silhouettes of the soldiers billeted there, drawn on the walls of the mews, could still be seen some 25 years later by the next generation of fighting men.

There were a number of houses in the 1911 Exhibition that had not been sold at the outbreak of war and these were requisitioned soon after its commencement. See the chart, below, (drawn from the rate books of the time) of premises requisitioned.

At the beginning of the war, Sir Herbert Raphael applied to the War Office for permission to raise his own battalion. On being granted permission, he formed the 18th KRRC (King’s Royal Rifle Corps) whose strength was over 1,000 and who were encamped at Hare Hall. He later raised another battalion, the 23rd. In 1915, although 56 years of age, he joined the 24th Battalion Royal Fusiliers (2nd Sportsman’s Battalion) as a private, the first Member of Parliament to do this.

Whilst in training with the Sportsman’s Battalion, he was stationed at Grey Towers, Hornchurch, . At the end of the war, he was given the rank of Major. Sir Herbert ultimately became Assistant Provost Marshal at Folkestone.

The Essex Times reported “an announcement was made by Mr. Ronald McNeill in the House of Commons that Lady Raphael was in receipt of a War Separation Allowance of 16s. per week. Members laughed heartily and were gratified that the War Office had put her outside the possibility of destitution”. The money was donated to charity.

The Artists Rifles Officers Training Corp trained 10,256 officers from 1914 to 1918. Many went into the regular regiments (1635 in total), 936 officers went into service in the RFC. The biggest group of 3,090 went into the new armies which came about from various recruitment drives. Many of these young officers would die on the battlefields, going over the top with their men.

The regiment itself has a grand history starting its life on the 28th February 1860 as the 38th Middlesex (Artists) Rifle Volunteer Corps with its headquarters at Burlington House, London. When WW1 broke out NCOs of the Artists Rifles were selected to be officers and sent to other regiments, known as “The First Fifty”. Massively outnumbered, many of these men would die before the year ended, as they fought to stop the German advance. Their training was second to none but still the sheer number of the German military was no match. The Kaiser himself said that the BEF (British Expeditionary Force) was a “contemptible little army”. While some saw this statement as a slur, it was in fact meant to be praise, as such a small army had managed to stop the German advance in its tracks.

In 1915 selected officers and Non commissioned officers (NCO’s) were transferred to run an Officers Training Corps (OTC) at Hare Hall, Gidea Park which is now the Royal Liberty School. During the Great War the regiment received 8 Victoria Crosses and many battle honours. Hare Hall camp trained many artists including Paul Nash, Wilfred Owen, Edward Thomas, Alfred Leete and Noel Coward, to name just a few. Both Wilfred Owen and Edward Thomas would die on the battlefield. Whilst training with the Artists’ Rifles, Wilfred Owen was billeted in Balgores House, Balgores Lane in the building that had been used as the tea rooms for the 1911 Exhibition and is now the home of Gidea Park College. Some of his letters refer to his time at Balgores House.

In October 1940 Romford Golf Club’s professional shop and clubhouse were requisitioned for military purposes and the Club used “The Homestead” 19 Gidea Close, overlooking Gidea Park Tennis Club, as its clubhouse. One of the tennis courts was used as a car park for members. It was reported by the secretary that a downstairs room was provided as a mixed lounge, with a dartboard for the men. Ladies were not allowed to remain in the bar, however, and the upstairs rooms would be for men only, except when meals were served. The club’s furniture, not needed at “the Homestead,” was stored in the Mews Cottages next to the entrance to the golf club. One night, incendiary bombs set fire to the roof of the Mews and the stored possessions were ruined by the water used to extinguish the blaze (the Golf Club moved back to its premises in November 1945).

In response to a request from the Civil Defence authorities, members volunteered for work to render the golf course unsuitable for the landing of enemy aircraft. This was done by digging additional bunkers, stringing wire ropes 30 to 40 feet in the air between suitably placed trees and putting other obstacles on the course. Several concrete emplacements for Bofors anti-aircraft guns were also constructed on the course, the remains of which can still be seen today.

(“The Homestead,” 19 Gidea Close, played one more role after the war as it became the home of George Patchett. George Patchett had been working in Europe on munitions when the war broke out and was spirited back to England and worked at the Sterling factory in Dagenham. He helped design a machine gun (Sterling Mark IV) which went into production in 1956 and a year later a second version, the Sterling Patchett Mark V, a silenced version of his original gun, was adopted by the British Army.)

London was, of course, the target for the German bombers, but, because of the proximity to the capital and the fact that the outer ring of barrage balloons and anti-aircraft gun defences were just to the west of the town, Romford received an undue proportion of attention from the enemy. Those bombers unable to penetrate the defensive ring around London would jettison their bombs in turning for home, many falling in and around Romford. Indeed, between the first high explosives and incendiary bombs in 1940 through to the flying bomb and rocket attacks of 1944 and early 1945, only a few hundred of the borough’s 18,000 houses escaped damage. Several hundred people lost their lives. Although there were few of the concentrated heavy attacks suffered by other areas, the constant threat of bombing in this area was probably far more stressful to the local inhabitants at the time.

At the time of the 1911 Exhibition, Sir Herbert Raphael had given land at the end of Heath Drive (now No. 10) for a new fire sub-station. This station was still in use during the Second World War.

14 Heath Drive (1911 Exhibition house by T. Millwood Wilson), on the north corner with Elm Walk, was destroyed in the bombing (on 21/10/40) and rebuilt in 1946 to the exact specification of the original house.

Our Secretary, Joyce Leicester, remembers commuting to London to work and seeing in the evening, from the unlit carriages of the train, many fires resulting from the bombing . She also recalls the sound of the anti-aircraft guns each night, which sounded as loud as the bombs, and, on her way home from the station, taking refuge in a stranger’s house to shelter from the shrapnel.

Joyce also recalls being evacuated while an unexploded bomb was defused at Gallows Corner and having RAF personnel billeted in her family home, in Upper Brentwood Road, from an RAF base at the sports field at the junction of Gallows Corner and Main Road. Her mother had a lucky escape when All Saints Church, in Squirrel’s Heath, was flattened at 11 p.m. on 10th November 1941, her mother having been preparing refreshments for a party at the Church that afternoon.

Owen was born on 18 March 1893 near Oswestry in Shropshire

From 1913 he worked as a private tutor teaching English and French at the Berlitz School of Languages in Bordeaux, France and later with a family. There he met the older French poet Laurant Tailhade, with whom he later corresponded in French. When war broke out, Owen did not rush to enlist – and even considered the French army – but eventually returned to England.

On 21 October 1915, he enlisted in the Artists Rifles Officers’ Training Corp. For the next seven months, he trained at Hare Hall Camp (Built in 1769 and now the Royal Liberty School) . He lived in the building that was originally built as the tea rooms for the 1911 exhibition and is now the home of Gidea Park College. On 4 June 1916, he was commissioned as a second Lieutenant (on probation) in the Manchester Regiment. He was wounded and returned to Scotland for treatment where he met Siegfried Sassoon and the influence of both the war and Sassoon led him to write his well known poems describing the horrors of the war.. He returned to France in July 1918 and on 1 October 1918 Owen led units of the Second Manchesters to storm a number of enemy strong points near the village of Joncourt.

For his courage and leadership in the Joncourt action, he was awarded the Military Cross He was killed in action on 4th November 2018, a week before the armistice was signed and was promoted to the rank of Lieutenant the day after his death.

The Arts and Crafts movement, flourishing in Britain between 1880 and 1920, rejected mass production in favour of creativity and individualism. Opulent, fussy decoration was ditched for craftmanship, honest design, traditional building techniques and ordinary materials such as stone and tiles. External features were often built with traditional, local materials and designed to clearly express their structural function. Its adherents – artists, architects, designers, writers, craftsmen and philanthropists – were united by a common set of aesthetics, that sought to reassert the importance of design and craftsmanship in all the arts in the face of increasing industrialization, which they felt was sacrificing quality in the pursuit of quantity.

The architecture of the Arts and Crafts Movement was its most radical and influential aspect, and architects such as Webb, Voysey, M. H. Baillie Scott (1865-1945), Norman Shaw (1831-1912) and Charles Rennie Mackintosh, developed principles which not only influenced 19th century architecture but would later become the touchstones of twentieth-century architects. These included the belief that design should be dictated by function, that vernacular styles of architecture and local materials should be respected, that new buildings should integrate with the surrounding landscape, and that freedom from historicist styles was essential. The result was a number of buildings – especially houses for the middle class – that architectural historian Nikolaus Pevsner called ‘fresher and more aesthetically adventurous than anything done at the same time abroad’. These architectural canons fed the growing Garden City movement in Britain in the early twentieth century, which brought together on a large scale Arts and Crafts design and Morris’s social reform ideals. The Garden City movement was based on the theories of Ebenezer Howard (1850-1928), as put forward in his highly influential book, Tomorrow: a Peaceful Path to Real Reform, 1898 (later revised as Garden Cities of Tomorrow in 1902). Howard’s social policies advocated the creation of small, economically self-sufficient cities throughout the country, with the aim of halting urban sprawl and overcrowding. Numerous such cities were built, with varying degrees of success, and the ordinary home became the focal point of progressive architects throughout the country.

To find a property, enter street name in the space above and when the details are shown, click on the Door No column heading.  Scroll down to the desired property. 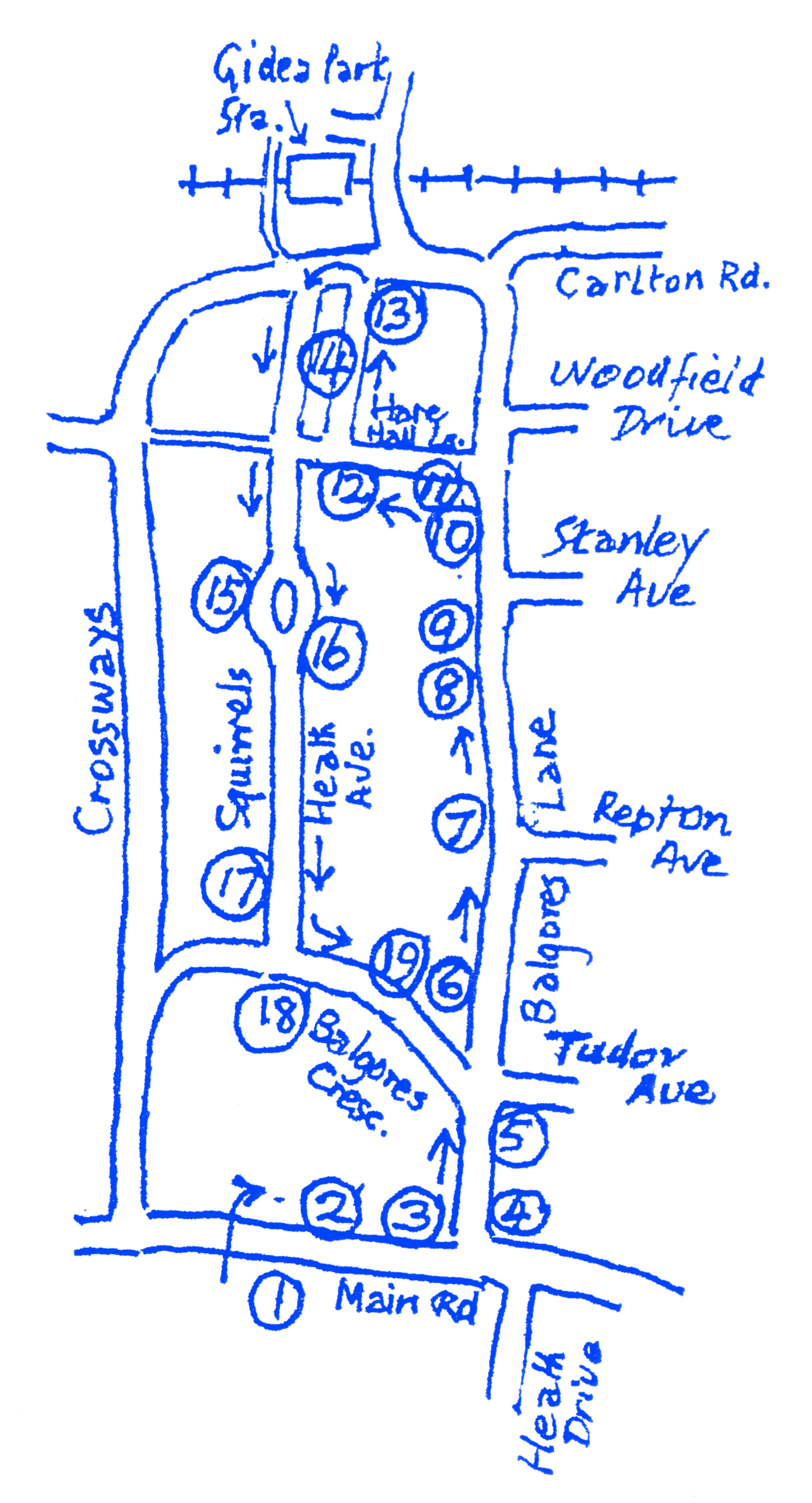 The Area of Benefit is defined as:-